Who Me? No Way Crocheters Don't Knit!

Crocheters don't knit, right? Just like Knitters don't crochet. Probably something to do with using one hook versus 2 needles. It's a whole different beast. I've been crocheting since I was about 7 or so, my grandma taught me how. I still remember my first project. It was two yarns, a red and a green, used together, and was one long chain. I was so proud of it. Even more so when my grandma started using it as a Christmas decoration by stringing it along the living room wall using it to display all the Christmas cards she received.  Since then I have learned more stitches and designs than I can count, or remember for that matter. I've done blankets, hats, sweaters, booties, slippers, ponchos, doll cloths and stuffed animals to name a few. Through it all, I never had the urge to pick up knitting needles.

What was the point, right? Really, they both use yarn, I can crochet the same things that can be knit, so I don't need to know how to knit. Well, several years ago, I was in a yarn store and happened to run into a lady who was sitting there knitting. I watched her for a few moments fascinated at how fast her needles went. I'd never seen anyone knit before. I know I've had people watch me crochet with the same wonder (especially when I do it without looking), but this was something new to me. So I asked her about it. I told her I'd never knit before, didn't know the first thing about it, and didn't even know anyone who did. But that I crocheted.  Undaunted, this kind stranger grabbed a second set of needles from her bag, and a skein of yarn and proceeded to show me how to cast on. I couldn't believe I was knitting.

Before I left the store I picked up a set of knitting needles (I grabbed purple because I liked the color and had no idea what size I really needed, they're size 8), and a skein of pink and blue yarn. Along with a beginning knitter's book. I got to work on my very first project. I figured I'd start simple to get the hang of it. I decided on a pot holder, square, nothing fancy. And got to work with my new found skill. Well, after a few skipped stitches and looking at the uneven rows, I got discouraged and put the needles and yarn in a box to pick up again later.

Here we are, about 10 years later. I ran into a very nice lady in the mall and she was knitting a super cute hat. Feeling the texture you can get with knitting, and knowing the patterns I've had to bypass because they were only written for knitting, I felt a tiny bit of longing for the crafting skill I had yet to grasp. But it went away, at least for a couple days. Then I watched a cute little crafting show, and wouldn't you know it, they were talking about knitting on this episode. Not only that, but she made it look so simple. I had to give it a try. So, I dug in my closet for that box I'd put my knitting in so many years ago and finished off the pot holder I had started. Thought it still leaves something to be desired in the quality of the work, I managed to finish it. Of course, all I had left was to cast off. So  watched a few videos online to figure that one out. Only dropped a couple stitches along the way, but was able to retrieve them. So, now that I have the new information from the show, and the benefit of so many knitters online, I'm ready to have a go at a new project.

This time I'm starting smaller. A can cozy (for soda cans). Basic instructions are, with size 7 needles (I'm using 8 because that's all I have), and a sport weight yarn, cast on 40 stitches. I'm sure there is more than one way to cast on, so use the method you are most comfortable with. On the show, they used 2 colors and switched every 2 rows. I'm using a multi colored yarn, so not going to be switching. Continue stitching with a regular knit stitch until the piece is 4 inches tall. Then cast off (again, using whatever method you prefer). Sew the 2 short ends together and slip your soda can in.

I'm actually typing this as I knit. Half an hour into it, I'm half way through my second row. So far I've learned that I need to be patient and take it slow until I get the hang of it, and that I cast on too tight, need to make it snug but not tight. Things to note in case I decide I like it after all. Time to get back to stitching... 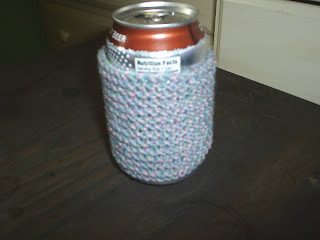 Hm, a few dropped (but saved) stitches, an almost dropped needle, tingly fingers, and 4 hours later, I have my can cozy. It's not winning any awards, but it will get the job done. Knitting is a lot harder on the fingers that I would have expected. I know I'm still a crocheter at heart, because all through the project I kept wondering, "How can I translate this into a crochet pattern?" I'll have to work on that...
at 10:19 PM