Took a week off blogging by accident.  You know how it is, one thing happens, and then another, and life gets crazy and before you know it a week has gone by and you just have no idea where the time went.  Well, that's what it has been like for me this past week.  So, here I am trying to get my thoughts in order and back on track with everything!

De'Anna (my daughter) recently pointed me in the direction of Listia.  Have you heard of it?  Are you using it?  If so, what do you think of it?  I found this on Wikipedia about the company:

"Listia is an online marketplace for trading goods between people using a virtual credit system instead of real money. The marketplace uses an auction system where users bid on each other's items until the auction ends, and the highest bidder wins. The user who listed the item then arranges for a pickup or ship the item directly to the winner.   Users earn credits during sign-up and then continue to earn more as they place items in the marketplace. Purchasing credits is also an option.  Listia was launched in August 2009.  In 2010, the site passed the 1,000,000 auction mark and was named one of the top 100 websites of 2010 by PC Magazine."

Listia also offers raffles.  We are going to try setting up a few raffles, just to see what happens.  If you want to check out our first raffle for fused glass decals here is the link:  http://www.listia.com/raffle/89 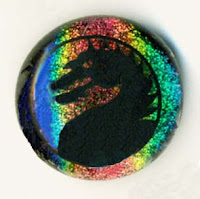 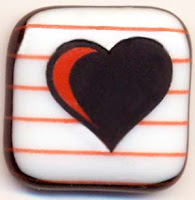 I used a dragon off the Dragon Card to put on the dichroic rainbow cab and a black heart with a clear swoosh area from the Heart Card for these two pieces.  They'll get bails and cords later so they can be worn as necklaces.

Gotta get the grandkids up for breakfast...just because school is out they don't get to sleep all day!  We've got brown lunch bag puppets to make, a bowling tournament on the Wii, cupcakes to bake...and if we can fit it in to our already busy day...a trip to the grocery store.  The grocery store is not my idea of fun with 5 year old twin boys and their 7 year old Princess sister; but it is one of life's necessary evils.  Depending on how many times I have to chase them down, or ask them to behave will determine how many bottles of alcoholic beverages make their way into my cart.