Going Green with the Drain King

Have you ever seen the episode of Plucky Duck called 'The Potty Years"?

Since there are 5 adults and 5 children 5 years old and under living in my home, I can totally related to that cartoon.   About a month ago we had to replace the toilet in the 'guest' bathroom after it began overflowing 3 or 4 times a week.  No matter what we did, it just kept overflowing.  I'd wake up at 3am to use the facilities only to find a swimming pool where the bathroom ought to be.  When the old toilet (Is commode more politically correct?) was removed a rat tail comb was found lodged inside.  The comb could be removed, the flow restored and the new toilet returned; however, since the old toilet had already been removed and the new toilet had already been unboxed, and since the new toilet was a water saver and supposedly could handle just about anything the kids might flush, we decided to go ahead with the installation.

This week the kitchen sink stopped up and refused to be cleared.  We tried the 'green' approach.  You know, vinegar and baking soda.  Tried it twice to no avail.  I wondered if we should call a plumber; my oldest son said when we needed a plumber he would let me know.  No running water in the kitchen for 4 days.  All the pipes under the sink were in a plastic bin on the kitchen floor.  I called my oldest brother, Mike and asked what he would recommend.  Being a Project Superintendent for a construction company that builds new homes, I figured he might have an idea or two.  Mike told me to go buy a weinee.  I told him I wasn't hungry, I just wanted to clear a clog from the drain.  Mike said exactly as I expected him to say, "Ha, Ha.  Funny Sis.  Go to Home Depot, tell them the size pipe you have and ask them for a weinee."  Okay, that all sounds just a bit too kinky for me, so I went to Orchard Supply instead (they were closer).  While it doesn't say "Weinee" anywhere on the package, I found the gismo Mike had recommended, took it home, gave it to my oldest son and 5 minutes later had a clear drain.  Needless to say, I was shocked.  I thought my son was teasing me.  He assured me he wasn't and turned the faucet on full blast to prove it.  The water drained just as it should. 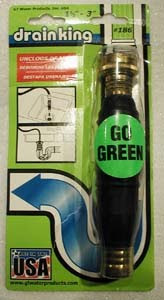 Apparently, the weinee (Drain King) gets connected to a garden hose, inserted into the clogged drain, and the faucet is turned on (the one connected to the other side of the hose).  The weinee will expand, filling the pipe and blocking the water from backing up.  Within seconds the drain will be cleared.